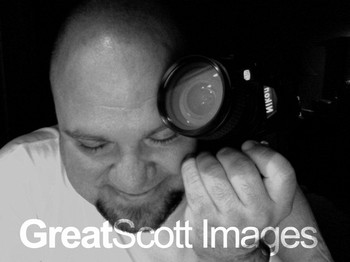 GreatScott Images is a team of people passionate about delivering honest, authentic photography to our client-friends with the kind of service we'd provide our own family. Each person on the GSI team brings a unique talent and perspective that, when stitched together with those of the other team-members, creates an awesome experience for our client-friends. Here's a little more about the folks at GreatScott Images...

Scott Wm Eastman is the "Scott" part of GreatScott Images (for the record, it's the rest of the team that brings the "Great" part). Scott has been a shutterbug since 1978 and shooting for fun AND money since 2005. With a background in graphic design, advertising and marketing, Scott's voice (or eye) is influenced and inspired by the creative world. Scripture says, "There is nothing new under the sun." That's especially true of art. Every frame for Scott is an amalgamation of every photograph, canvas or advertisement he's ever looked at; Every film he's ever watched. The results, we're told, are genuine and story-telling. And in the end, that's what we really want to hear.  On top of his art, Scott also has a background in improvisational comedy. This is good news for you on two fronts. A) It means Scott is always thinking on his feet and solving problems in his head. Now, whether those problems are poor lighting conditions or a boutonnière that won't stay on, it's nice to have a guy like Scott on your side. 2) It means that you, your family or your wedding party are 95% assured of having a good time! (Scott always says most people "get" him, but there's always 5% that don't.) The benefit of that is your photos will reflect real smiles and real laughter... Those make the best photos! email

Chris Eastman, Associate/Lead: Chris has been assisting, shooting and editing for us since 2010. The last name isn't coincidence, he's our nephew. And while that might have helped him get the gig, it's his artistry and creativity and passion that has kept him on the job. Chris' ability, personality and eye have made it possible for GreatScott Images to double our capacity for delivering honest, authentic wedding stories to our client-friends. And while those qualities are more than enough, it's the added bonus of his energy, passion and humor that has come to really make a difference in the weddings and portrait sessions he takes part in. email

Kate Eastman is the brains (and the looks) behind the business.  GreatScott Images was just OkayScott Images until Kate entered the fray. Kate brings organization and discipline to our party. As the business manager, she makes sure that Scott and the shooters are in the right place at the right time, that consults get scheduled and contracts get sent out. Kate is a public relations professional who, people say, is lovely to work with. She's a people person AND a get-it-done person; that's a wicked combination when it comes to making sure our client-friends are happy.

Stephanie Van Straten, Studio Manager: Stephanie is the glue that's keeping it all together - Every inquiry, question and request that comes in to GreatScott Images goes through her hands... And very capable hands at that! Stephanie attended UW-Oshkosh, graduated from Gill-Tech Academy and, before joining us, ran her own daycare business for years. Which is perfect because Scott needs lots of babysitting. We're super-glad to have Stephanie as part of our team - She's been a great addition! email